Chess games played with the Scandinavian opening are very interesting as this set-up is unusual and leads to unfamiliar middle game structures. 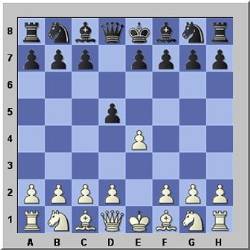 
The Scandinavian is not considered a good opening as the queen participates too early in the game and is chased away by white's knight losing valuable time for black. Matthias Wahls researched this opening 1997 further and modernized it. This made this opening more popular than it was before.

I don't believe in a setup where the black queen goes to d6 or back to d8 when attacked by the knight. I am convinced that the Wahls setup, where the queen is placed at a5, is the best setup for Black. If you move the queen back to d6 you block the development of the bishop on f8. This does not make sense to me.


This position of Black can be considered as the basic Wahls setup. Look where the black pieces are placed in both diagramms. The position of Black's queens-bishop is adjustable. Just the same applies for Black's kingside-bishop, which is positioned according to the requirements of the position. As Black you got to know the Scandinavian well to survive. You have to study typical middle game positions and techniques.

But I will not recommend the Scandinavian to you, as I don't want, that you waste a lot of time learning and playing an inferior opening system, like I did. White is scoring very well in the Scandinavian and this opening is not played in top level chess. Play the Sicilian or play 1...e5 instead.