The Four Pawns Attack is a variation of the Kings-Indian Defense and begins with the moves: 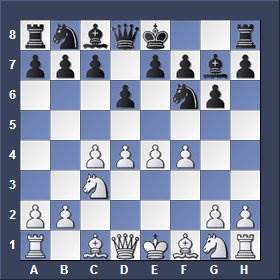 Modern line of play is: 5.f4 O-O 6.Nf3 Na6!? followed by a pawn sacrifice with 7…e5 which will create favorable tactical possibilities for Black. (see diagramm below) 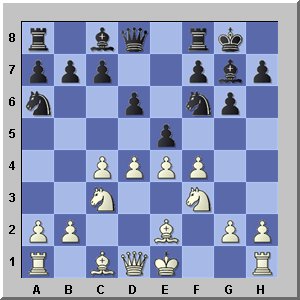 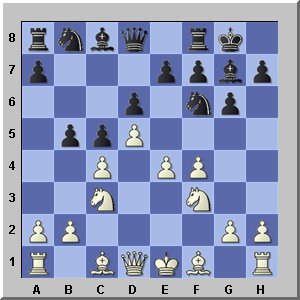 or can play the usual 7…e6 followed by 8…exd 9.cxd exchangeing pawns to open the e-file.

After that there is the 9…b5 Variation (see diagramm below). 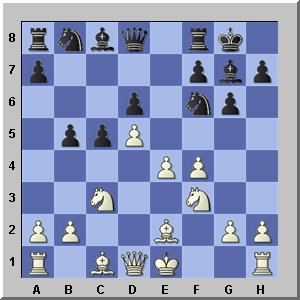 the 9…Re8 Variation (see diagramm below). 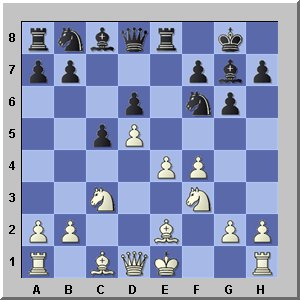 and the 9…Bg4 Variation (see diagramm below).

If you have White you should know all those variations especially the 6…Na6 Variation which is very tricky. You can replay those variations below. They are stored in the same order as shown above.

I believe that Black should not play the 9…b5 Variation and avoid the 9…Re8-Variation as White scores very well here. I have played those variations myself many times as White and I think that White got higher winning chances here. This assumption is confirmed by my database as well.

If you have Black then I recommend the 9…Bg4 Variation. In my opinion White can achieve nothing here as the knight on f3 will be exchanged and this stops White to make the e5 break. If Black plays the c-pawn to c4 and plays his knight to the outpost c5 then White will have a hard time not to lose.