What is Bullet Chess?

How long is Bullet Chess?

Bullet chess is played very fast at 1 or 2 minutes per side per game. I never liked this sort of chess as I can’t see any point to ruin my nerves with it.

For me, this is not chess at all, as you just move anything you see, to avoid losing on time. You just push wood, nothing else

There is no time at all to think and make a decent move. You just react to certain chess patterns, make moves and that’s it. Even if you have a winning position, this means nothing, as you still can lose on time. I can’t see any reason in playing it.

If you play bullet chess all the time, you will become a wood-pusher, who knows nothing about chess! It is for people who are too lazy to learn chess properly and just need a constant kick. 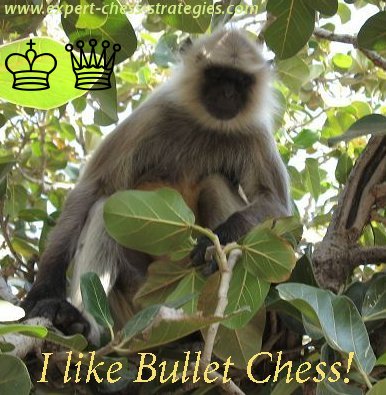 I think an ape, who makes fast random moves will play it better than you.

In Blitz you have 5 minutes per side per game and still can’t really think deep enough to make decent moves consistently. It is better than bullet chess, but very annoying because often you finally reach a winning position, but you have no time to win it because you ran out of time and still lose.

If you are young it might be fun to try it sometimes, but older chess players usually stay away from this kind of chess.

It may be good to test some chess openings and variations just to get the feel of it, and it might help you to think faster, but I doubt that you will learn to think deeply playing blitz chess. And it might strain your nervous system quite a bit.

Play rapid chess instead as you get sufficient time ( twenty or twenty-five minutes ) to play a decent game.