If you are looking for a solid opening as Black against 1.d4 then study the Queens Indian, which is a reliable chess defense. You can apply this system when White plays 3.Nf3. (instead of 3.Nc3)

If White plays 3.Nc3 I recommend you play the Nimzo Indian Defense which is very good. 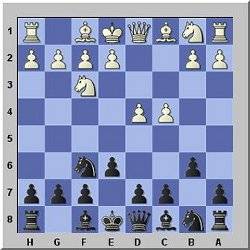 White does not control the center square e4 with his move 3.Nf3 and does not threaten to play 4.e4 and so Black has time for the move 3…b6 to prepare 4…Bb7 which controls the vital squares e4 and d5.

Black tries to control the center with pieces instead of pawns. The pawns move later.
When White plays 3.Nf3 (instead of Nc3) he will avoid the Nimzo-Indian defense. For that reason the Queens-Indian is related to the Nimzo-Indian.

Both systems try to stop White from playing e4 and gain control of the center. The Queens-Indian is a respected and solid opening and was played by many grandmasters throughout the history of chess.

Black can avoid playing this defense and can play 3…d5 instead, which transposes to the Queens Gambit Declined.

This is an important opening so you should study it well.