The Classical Variation is a chess variation of the Sicilian Defense.


It starts with the following moves: 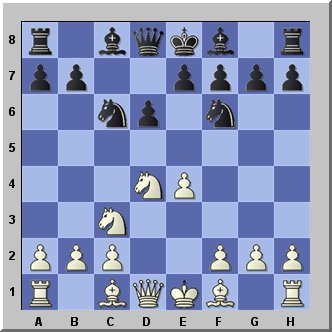 Black does not play 5...a6 as in the Najdorf variation but rather develops a piece instead and brings his knight out to its most effective square c6. As both black knights are placed "classical" on f6 and on c6, it is called the Classical-Variation.


Popular now is the Richter-Rauzer Attack where White can now answer with 6.Bg5 (threatens to double Black's pawns) or the active move 6.Bc4 which was used often by Bobby Fischer against all kinds of sicilians, because the bishop is quite aggressively placed here. This is usually answered with 6...e6 to limit the scope of the bishop. But White plans to push now his f-pawn to f5 and puts pressure on the e6-pawn. After the moves 7.Be3 Be7 and short castle it is called Sozin Attack and if he castles long with 8.Qe2 followed by 9.0-0-0, it is called: the Velimirović Attack.