How to start a Game of Chess

Would you like to know how to build up a good chess formation strategy right from the start of your game? Then apply proper chess strategies.

A chess game is governed by iron laws like the law of gravitiy. If you submit to those laws you become a good player, if not, you will always remain a patzer and you will not make any progress at all. 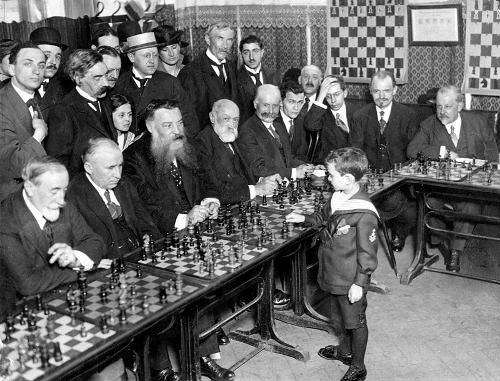 “Sammy” playing versus “the world”

I know chess players, who play chess for thirty years now and still play the same nonsense like thirty years ago. That’s a fact. They don’t read chess books and have no idea about chess strategy at all. This proves that playing chess only, without reading books and learn chess theory, is not enough to improve.

– To achieve progress you need to know the laws of chess.

– But just knowing the laws is not enough. You must apply that knowledge consequently in every move you make.

– If you impose your will upon the position and play stubbornly that what is dictated by your own imagination and wishful thinking you often violate certain chess principles and spoil your game.

– Don’t impose your will upon the position, but let the position tell you what move is required. This is the secret of good chess, but it is hard to get there. It is like a meditation about your position. Ask your pieces where they want to go and then place them on good squares. First understand your position, then make a move!

The Laws of Chess

Right from the start do mobilize your forces to the optimum!
This means: Get your pieces out on the kingside as fast as possible. Why that? Because you want to castle as fast as possible to bring your king into safety! If you develop the pieces on the queenside instead, then you can’t castle fast enough. This violates the law of development already to a certain extent.

To develop the bishops you must move the King and Queen pawns or the bishops can’t get out into the open an breeze some fresh air.

Do mobilize as rapid as possible. Don’t waste time making silly and useless pawn moves out of fear on the edge of the board. If you move something else that slows down your speed of development then you have already violated the chess law of development and your opponent will run you over in the center. It’s as easy as that.

What did I hear? A pawn move is strong? Hey you! Do you want proof? Here it is! Replay the game called Silly Pawn Move

and after that come back here.

The best chess formation strategy is achieved when you submit your own will to the laws of chess and follow them obidiently. Understand the magic of your chess position.

2. Place your chess pieces on useful squares – Control the center!

A good chess formation strategy is to place pieces in the center area if possible. Put your Pieces on useful squares where they have maximum control of the squares in the center! Best places for the white knights are f3, c3 (sometimes d2) and for black knights f6 and c6 (sometimes d7).

Don’t play a knight to the corner square a3 (there are exceptions when the position is blocked completely in the center.) When your pieces and pawns are placed near the center you can move your pieces to any part of the board. Furthermore you have control over your opponents pieces. His pieces can’t move about as they wish as you control important squares which in return limits the scope of the movements of your opponent’s pieces.

and come back here afterwards to learn more about the right chess formation strategy.

The center can be controlled with pieces from a distance as well and it is not necessary to control it only with pawns. This idea is used in different openings like the Alekhine’s Defense.

Queen and rooks are developed later in the game, when the light pieces are out (knights and bishops) and when you have castled already. There are exceptions as always, but you got to learn the principles first and deal with the exceptions later on.

Never leave your king in the middle of the board. He will be attacked from all sides and you can’t survive the attack for long. Sooner or later you will lose.

But on the other hand newer castle right into the attack of your opponent. You must see when the opponent can attack you.

Look at this game and replay it: Strong Bishop Exchange

This chess game shows you, not to give your strong bishop for the knight in an open position and not to castle right into the attack. Come back here after.

You don’t follow the correct path if you bring your queen out to early. The queen comes out after the light pieces are developed and you have castled. If you bring her out too early she will be chased around by other light pieces of the opponent. The opponent will gain time units (tempi) in developing his pieces and attacking your queen at the same time. Only beginners move out the queen very fast. This is not the right chess formation strategy at all.

5. Protect the weak square f7 as black or f2 as white!

A good chess formation strategy requires also to protect very vulnerable squares! The particular spot near the king called f7 or f2 is very vulnerable. See for yourself and replay the three games on this topic: Weak Spot f7

A good chess formation strategy would be, when the whole family of your pieces attack the kingside, trading off enemy defenders, sacrificing a piece to destroy the king’s pawn protection and then the rest of the family will checkmate him.

Don’t move twice or more times with the same piece in the opening. Donald Byrne has done that and lost. He moved his bishop twice in the opening and see what happened – playing against the american former world champion Bobby Fischer (died 2008) in his famous game: The Game of the Century

As a real chessplayer that you are going to become now, you should know this famous game. Please replay it and observe the chess formation strategy of Bobby Fischer, who is playing the Grünfeld Defense.

9. Don’t give every check that you see.

Only a beginner does that. There is a saying that goes like this: A patzer gives every check he sees because he thinks it could be checkmate. Replay this game Senseless Check and you will understand.

10. Study the piece and pawn formation of your opponents position.

Find the weak points in the pawn formation and organize an attack on isolated, doubled and tripled pawns and other weak structures.

11. Don’t move too many pawns in the opening

If you do that, you just waste time. When you develop a pawn your opponent will bring out a piece instead and some moves later he has developed more pieces than you. He will control more squares in the center and will get the initiative and he might run you over.

If you have strongly placed knights or bishops don’t allow your opponent to chase them away to bad squares.

13. Don’t blunder away pawns and pieces.

Watch out all the time and don’t believe your opponent!
He does make mistakes!
Here you win a pawn with white. Look at this position, black just made a bad move in the english opening…e4?

If you are a materialist and capture enemy pawns in the opening this can lead to desaster, because you waste valuable time. You should develop pieces instead. Or you might lose like in the following diagrams.

In the above game White grabs a pawn too early and runs behind in development. As a consequence he runs into a deadly attack.

In the above game Black grabs the pawn on d4 and loses his queen.

A good chess formation strategy requires to study some good opening systems and memorize the variations of the openings in detail.

If you do obey all above mentioned chess laws, then you follow the correct chess formation strategy and are going to win many games.