Looking for Chess Games Electronic? You probably know that NOVAG and other companies have STOPPED production of chess computers due to economic reasons. You can buy only the top quality electronic chess computer from DGT that is offered below! This is the only one available, but not suitable for the average consumer.

“…the most extraordinary chess computer ever produced for sale (price tag about $3500) has been released in early 2014, the Revelation II. Although, that price tag is unthinkable for the average consumer, those that have bought them are incredibly pleased.” – Raphael Neff – ChessHouse

It is high quality and expensive and not for average consumers. 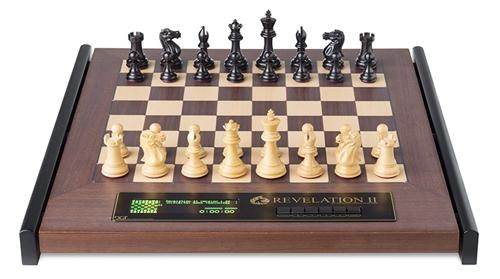 Top quality chess computer with powerful software and designed for your ultimate chess playing experience. It has a luxurious wooden chess board and integrated chess computer system developed in the Netherlands by Digital Game Technology and Phoenix Chess Systems.

The chess board is a DGT sensor board with individual piece recognition and inlaid LED lights to indicate the chess moves. The green OLED display and six large keys give this stand-alone system a classic menu controlled operation available in English, French, German, Dutch and Spanish. Complete it with your personal choice of hand carved electronic DGT chess pieces.

Revelation II unites multiple super strong commercial and freeware chess engines resulting in a great diversity in computerized chess play at ELO levels up to 2800 and above. Chess engines run on Revelation II but can also run on the PC through the wireless Bluetooth UCI Server.

New and updated engines will be available from the Revelation website and with upgrade possibilities for additional Flash Storage, stronger (Multi Core) CPU and new software or hardware add-ins, your chess pleasure is guaranteed future proof!