In chess if the king is in check, and the piece that is giving check is placed directly adjacent from the king, can the king capture it?

“Zwischenzug” is a german word. “Zwischen” means “between”
and “Zug” means “move”. An “in-between move”. 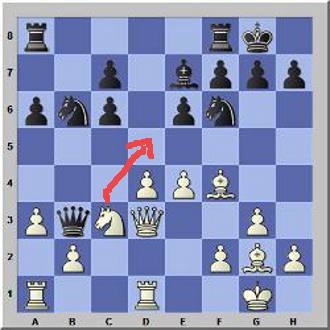 Now White does NOT recapture the Queen right away BUT makes a deadly “Zwischenzug” and captures the Bishop giving check at the same time. 2. NxBe7+

The King must move away 2…Kh8. Now White recaptures the Queen 3. RxQ and remains a piece up. White has a big material advantage and should win the game sooner or later.

Yes, If you touch a piece or pawn you must move it, if this is legally possible. If you do not intend to make a move, but just want to adjust the position of the pieces and place them correctly on the board then you must announce this before with the french words “j’adoube”. This means: “I touch”.

Your opponent is allowed to offer a draw only if it is his turn.
He usually makes his move and offers draw at the same time. This way he gives you the chance to evaluate his move and to convince you that his move is strong enough to warrant a draw. You can think about his move for sometime and if you intend to accept
his draw offer you can tell him so and shake hands.

If you don’t want to consider draw at all, you just make your move without saying anything and the game continues.