There are many things about chess that I will call “chess secrets”, that are never explained in chess books and can’t be explained as they occur on a subconscious level.

Most chess books are written by chess grandmasters and for them to see plans and concepts comes natural and they often assume that the reader sees what they see. They read a position like a newspaper, and I mean, that they read it fast and clear and the amateur looks at the board and sees nothing most of the time.

They feel and see the right concept in a given position immediately and start calculating, whereas normal players -non-grandmasters- as we are, have to virtually force themselves mentally to illuminate themselves by going through all this, step by step, hammering each concept into our minds to grasp and never forget these ideas.

Chess is not only about memorizing hundreds of opening lines. There is something below the surface that is hard to grasp. Just try to understand the following game. Fritz Chess Program versus No Name. Try to understand why Black has drifted into a lost position. Black has played well, you think….yeah, that’s what YOU think. 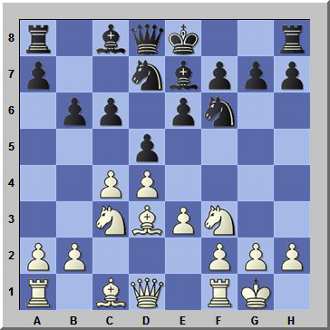 Both players have developed their pieces. So far so good. BUT what is disturbing in my mind is that Black has not castled but played b6 very early. Well this might mean nothing yet but it POPS UP in the mind of a fine-tuned player. You just notice it.
Then you feel the urge to use this to your advantage and try to seize the initiative in the center, where else, playing e4.

Hey! Don’t make a silly waste-of-time-move now like a3 or h3 or Bd2! or some other stupid thing. I must formulate a principle to grasp for you or we will get nowhere!

This move puts pressure on the center and the pawn threatens to go ahead to attack the f6-knight. So what? If this happens the black knight must retreat and this will weaken the kingside.
I formulate a new principle now! Memorize it!

This will liberate your sleeping c1-bishop in the long run because it MIGHT come out along the c1-h6 diagonal, but this is just a positive side effect. You have to think about the future, my friend, and increase your possibilities and your development potential. Add up potential in chess.
1.e4 dxe 2.Nxe 0-0
leads us to the following position. Play the last moves up till here in your mind. In a real game you must do this too before you execute your moves.

What now?
You know one thing for sure. Whatever you do, you should play in the center. Now where to go with the queen. I show you another concept.
Queen goes to e2. Why? 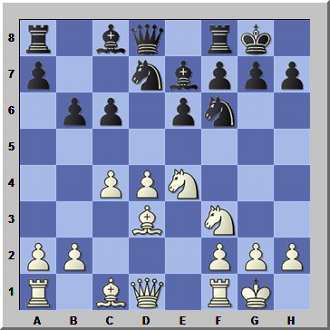 3.Qe2 Re8
see diagram below 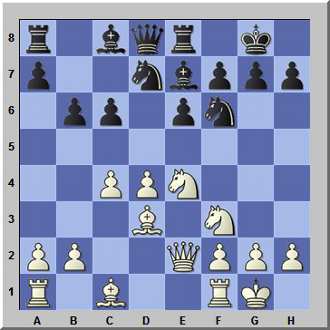 What now?
Well, you know you should play in the center and this will help you to think about center moves ONLY, avoiding trash moves!

You know that if the black f6-knight gets driven away that this will weaken the kingside.

4.Ne5 Bb7
leads us to the following position. 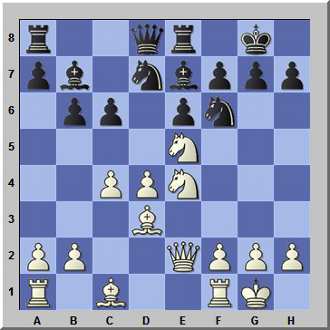 What now?
Just relax and look at this position for a moment. What do you see? What are the facts?
I know it is hard, very hard, to see anything for White now.

Facts – Look at the Chess Position above 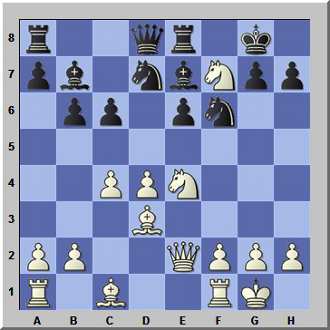 Now switch on your brain and start calculating. Let’s see, if you can estimate that this is a winning move.

5.Nxf7 KxN 6.Ng5+ Kg8 (if 6…Kf8 7.Qxe6 and checkmate cannot be avoided)
This leads us to the following chess position below. 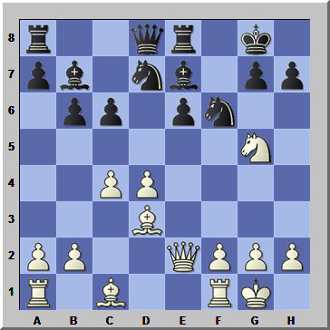