The Chigorin Defense originates from the Russian chess grandmaster Mikhail Chigorin. It begins with the moves: 1. d4 d5 2. c4 Nc6 where Black develops his pieces as fast as possible to generate active piece play.

In the Chigorin Black does not support the center pawn at d5 which is attacked, but developes a knight instead. This blocks the c-pawn as the knight is placed in front of it. See diagram below 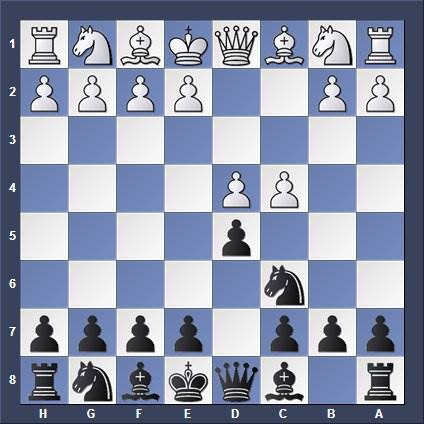 It was believed that 3.c4xd5 is good for White because Black had to answer Dd8xd5 and exposed his queen too early which got chased around by enemy pieces.

Considering all this, Black does violate certain chess principles with that, but in return Black gets active piece play which might prove dangerous for White if he doesn’t know the Chigorin well enough. This opening is hard to handle if you never played it before as White. You can easily go wrong and lose.

This chess defense is a very unusual opening and leads often to a sharp tactical game in the center.

It is not quite clear if this opening is sound but improvements has been found for both sides and it appears to be playable for Black. This opening is usually not played among chess grandmasters, only grandmaster Alexander Morozevich plays it and has written a book about it. Get Books/DVD