If you want to overrun your opponent because you think he cannot defend well, or plays too passive, then try the Evans Gambit. This might really upset him mentally.

The opening chess moves of the Evans Gambit are very active. It originates from Kapitän Evans (1824) and belongs to the open games.

Bobby Fischer and Garri Kasparow played this opening a few times and it is considered playable, but not often played among chess grandmasters. Sometimes improvements for this chess opening are found and there is no reason why it should not be played.

However, you should play it only if you know it well and prefer tactical rich chess positions, have nerves of steel and if you are a somewhat aggressive chess player by nature.

If you like quiet positional chess, then stay away from this opening. 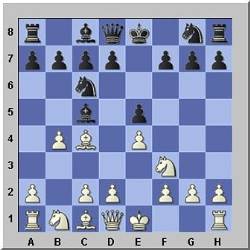 This opening is part of the Italian game. Black can reject the pawn sacrifice by 4…Bb6 but then White will gain space advantage at the queenside playing 5.a4.

If Black accepts the pawn offer then White will gain the better development of his pieces. But Black should not take the second pawn after 4…Bxb4 5.c3 Bc5? 6.d4 exd 7.0-0 dxc? as after 8.Bxf7+ Kxf7 9.Qd5+ White recaptures the sacrificed piece and the black king is exposed.