by Vipin.R (India)
The Pawn and King Endgame irritated me a lot…please give a solution.

You are right. It is not easy to understand this endgame as a beginner in chess.

I will explain it straightforward in simple words now and I am sure you will understand it quickly.

Just get this position below as White and make sure it is not your move. That’s it! 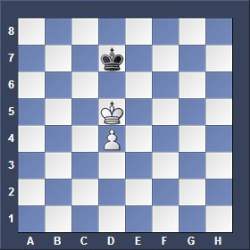 1. Your pawn is BEHIND your king
2. Kings are OPPOSING each other

This is a Draw because the Pawn is BESIDE the king
This position below ends in a STALEMATE, which is a draw. 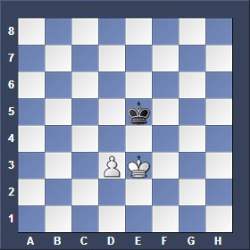 You are White
Look at the following chess positions to learn what to move next as White. 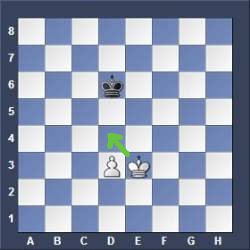 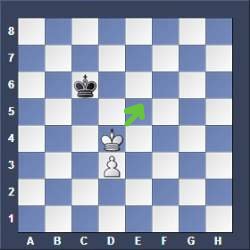 MOVE YOUR KING SIDEWAYS
This makes room for the pawn to move ahead. 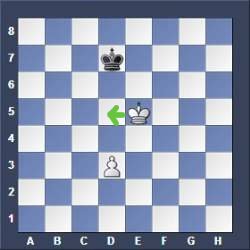 Above: Get the OPPOSITION
If you push the pawn forward (1.d4??) Black will get the OPPOSITION! (1…Ke7 Draw)
So after 1. d4?? Black plays 1…Ke7 and gets OPPOSITiON, and then you must move your king away from the opposition and Black keeps moving into OPPOSITION all the time endlessly.

Example: 1.d4?? Ke7! 2.Kd5 Kd7 3.Kc5 Kc7 and so on forever …
Remember! In this case you can’t push the pawn because then the pawn would be BESIDE the king which is a draw (position ends in a stalemate). 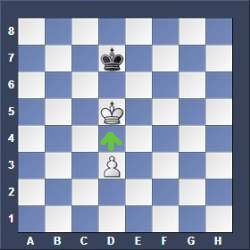 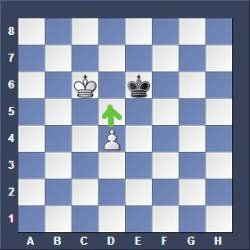 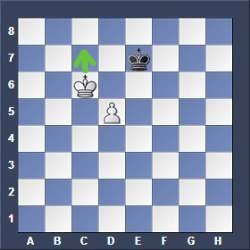 White gains control over the promotion square d8 and then pushes his pawn ahead.

Edge Pawns are a Draw

If you have an Edge pawn on the a or h-file you can’t win.
See below 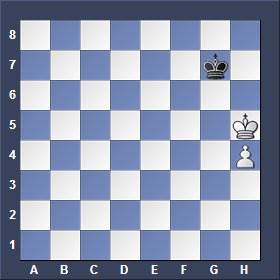 White plays 1. Kg5 and gets the OPPOSITION, but the game will still be a draw because the king can’t move sideways on the edge.