Wilhelm Steinitz was born 14th May 1836 in Prag and was an important Austrian-American chessmaster from Böhmen and the first official world chess champion.

He revolutionized chess and critisized the aggressive attacking style (the so-called romantic style) that was played during his time.

He researched and played chess on a more scientifical level. Soon he formulated strategic-positional principles that were unknown in his time. This was the beginning of modern chess theorie.

His family was poor and some of his brothers and sisters died. Wilhelm suffered from a club foot and used a walking stick. As a child he was known as the best chess player in Prag.

In 1858 he moved to Vienna to study Mathematics at the Polytechnical Institute and financed his studies writing journalistical articles for austrian newspapers. Soon he realized that he could earn much more money playing chess in the coffeehouses in Vienna. 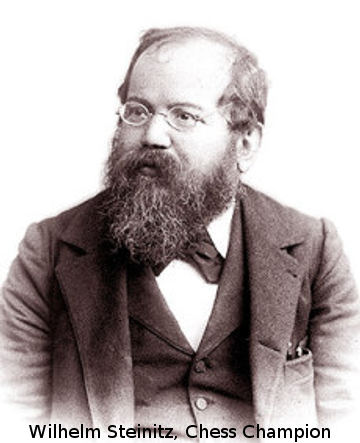 One day he played the wealthy banker Gustav Epstein, who complained that Steinitz thinks for too long until he makes a move. Steinitz said to him: „At the bourse you are Eppstein and I am Steinitz, but at the chessboard I am Epstein and you are Steinitz.”

In 1862 he partizipated in his first international tournament in London and achieved 6th place. After that Steinitz moved to London because England was known as the center of the chess world. He made a living playing chess in the coffeehouses of London.

During this time he played and defeated various opponents:

In the following years he has beaten various other opponents: