The Alekhine Defense is a chess opening which belongs to the half open games.

It begins with the moves:
1.e4 Nf6
Black does not develop his e-pawn (1...e5 or 1...e6) but attacks the white center pawn instead to provoke him to move ahead attacking and chasing the knight, expecting to create weaknesses in White's position as the e-pawn will be attacked and traded off later on. 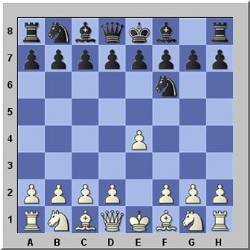 This idea originates from chess world champion Alexander Alekhine who used it 1921 in a tournament in Budapest. This chess opening is quite bizarre and ignores chess principles of the old school as Black allows the opponent to chase his knight around as he pleases right after the first move. White builds up an impressing pawn formation in the center which will be attacked later by Black. The balance and symmetry of the position is completely disturbed and only good players will be able to cope with the complexities of the position.

The Alekhine Defense has a respectable reputation and was played by Robert Fischer, Victor Korchnoi, Vassily Ivanchuk, Shabalov, Minasian, Lev Alburt, Aronian, Adams and Nakamura. At the moment it is not very popular but this is just a matter of fashion.