In this basic chess endgame queen vs pawn you have to know the right technique. To study this position makes only sense if the pawn has advanced already far enough and is sitting right before the last rank and the king is close to the pawn to be able to protect it. Furthermore the white king should be far away as well. Below you see the position that you should be able to win.

If the pawn is not advanced far enough or if the king cannot protect it, then the queen wins without any problems and no further study is required.

How to win it

The queen on its own can do nothing so it is necessary that the king can help the queen. In this position the queen gives a few checks to force the king to go in front of the pawn, then the pawn cannot move ahead. This way White gains time (one move) to come closer with the queen.

A Draw is reached in the Positions below 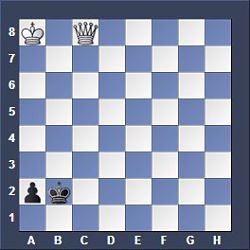 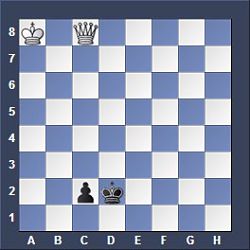 The positions above with the a- and h-pawns or c- and f-pawns will finally reach these positions below. On the left diagram the white king cannot come closer or the black king would be stalemate.
On the right diagram the queen cannot capture the pawn or it would be a stalemate. 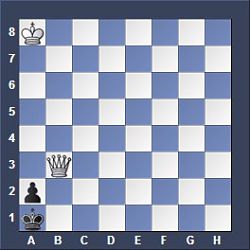 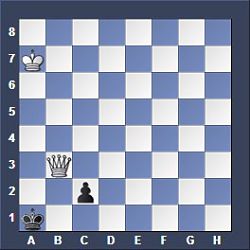