How to write and read Chess Moves? Learn chess notation to be able to read and replay chess games from other chess players. While playing a game of chess you make a list of chess moves. You write down each move after you made it.

To record each move in your game we use Algebraic Notation. In a serious tournament game, it is a rule, that you write down every move.

You are going to find this kind of notating chess moves among all chess organizations and in most chess books, chess magazines, and newspapers.

In earlier times another system called Descriptive Chess Notations was used, but Algebraic Notation is much easier and is standard now.

Every piece (other than pawns) is identified by an uppercase letter. This letter is the first letter in the name of that piece. But the letter depends on the language that is spoken by the player recording.

In English-speaking countries players use K for king, Q for queen, B for bishop, N for knight and R for rook. (The N is used for the knight because K is already used for the king. The N stands for nightrider).

German players use S (springer) for the knight. French players use F (fou) for the bishop. Other languages may use different letters.

For the pawn, there is no letter used, so a pawn move is easily recognized by absence of a letter.

The Move
The move of a piece is indicated by an uppercase letter and the coordinate of the destination square. For example Qe5 (move a queen to e5), Rf3 (move a rook to f3), d5 (move a pawn to d5. No letter for pawn moves).

The Capture
If you make a capture, insert an x between the letter and the destination square. For example, Rxe5 (Rook captures the piece on e5). When you capture with a pawn, write down the file from which the pawn moved. For example: dxe5 That means: The pawn on the d-file captures a piece or a pawn on e5. You can use shorter descriptions like dxe or de.

Same Type of Piece
If two pieces of the same type can move to the same square, you just add the file or number of departure to your chess notation.
For example there are two knights, one is sitting on g5 and the other on d2, both can move to f3. If the knight on d2 moves to f3 you write Ndf3 (not Nf3 as usual). And if the knight on g5 moves to f3, you write Ngf3. That’s all.

If both knights are placed on the d-file, one on d4 and the other one on d2, you write down N4f3 or N2f3, the numbers define where the knight came from.

Castling
The chess notation for castling is 0-0, if you castle short to the kingside. And the notation for a long castle to the queenside is 0-0-0.

Giving a Check
If you give a check just add + . For example: Bb5+ this means the bishop has moved to the square b5 and gives a check to the king.
A double check has the notation: ++ for example: Nf6++ , that means: the knight moves to f6 and gives double check.

Different Chess Notations
In chess books you will find some more chess notations in the annotated games themselves:

Chess Notation – How to read and record Chess Moves?

Now read the chess notation here in this example below!

If you understand chess notation you can replay all chess games that interest you and study fascinating chess variations played throughout the chess world.
Always write down your games properly and collect them. To improve your chess it is very important to study the mistakes made in your old games and learn from them.

Example: My chess notation in German. 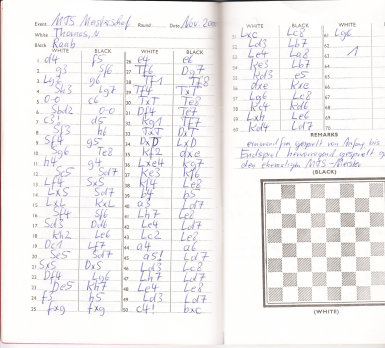 Go from – List of Chess Moves – to Basic Chess Rules

Go from – Chess Notation to – Home