The English Opening is a flank opening and belongs to the closed chess opening systems. You enter a positional chess battle. It is recommended for the experienced positional chess player who has a lot of chess knowledge and who knows how to handle complex positions in a positionally correct way.

The English starts with 1.c4 which is the fourth popular opening move. The aim is to control the center square d5. See below 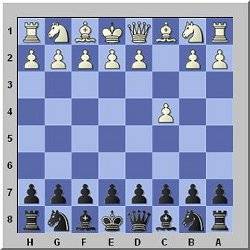 Get some books about the English to study it in depth.

The English is named after the English grandmaster Howard Staunton. He played it 1843 in his match with Saint-Amant and in the first international tournament in London 1851. Howard Staunton researched and developed this opening and played it on a regular basis.

The English is a very flexible chess opening which can transpose into other openings like the Queens-Gambit, Gruenfeld and Kings-Indian.

With his first move 1.c4 White controls the center square d5. The English chess opening is solid and has a good reputation. It was played in various world championship matches by Botvinnik, Bobby Fischer, Karpov and Kasparov. Nowadays it is quite popular and often played.

Main Lines are:
1…Nf6 can transpose into the Indian Defense.
1…e5 This is called the Reversed-Sicilian as White plays the Sicilian defense, but with a move up.

1…g6 leads to Modern Defense or after 1…d6 and 2…Nf6 to a set up of the King’s Indian Defence.
1…c6 2.d4 d5 transposes to the Slav Defense
1…b6 The English Defence. Black fianchettoes the queenside bishop after playing 2…e6 first, followed by moves like f5 and Qh4 later.

If you are a beginner (black colour) answer 1.c4 with 1…e5 and after that I recommend the following set-up for you, where your pieces are placed on natural squares. (or play the bishop to c5 in similar situations, if possible.)

Play this common sense setup as Black against the English Opening.

Black often transposes into other opening lines (ex: Kings Indian) as you will see when you replay the games below.