by Nobbler (Kent. UK)
He has only King. I have a Rook. Can you mate? Thanks

Yes, if you have a Rook only (and your King, of course), you can give a checkmate with the Rook.

To be able to do this, the Rook needs the help of your King. A Rook on its own is helpless. It needs support because you have to chase the opponents King to the edge of the board so the KIng can’t escape when you give the checkmate.

You have to apply a special technique to do this or you will be unable to force the opponents King to the edge of the board as the opponent will try to stay with his King in the center.
Read more about Basic Chess Endgames

White moves
See position below. White is a Rook up and wins. Try to get a similar position as shown below where the Kings are placed exactly opposite of each other. This way the opponents King cannot move sideways away from the check when the Rook gives a check and must move a row backwards.

When your King is opposite of your opponents King (as shown below), you give a check with your Rook. The King must move a row back and you have gained one row. You repeat this procedure until the King is at the last rank or at the edge of the board. Then you give a final check which will be checkmate. 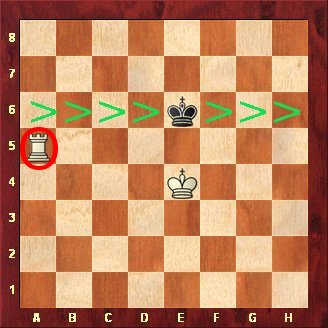 Waiting Move (See below)
White moves and makes a waiting move with the Rook because to give a check here is senseless as the King will move a row forward (to g5), not backward.
You have to cut off the King from the rest of the board so the Rook must stay at the same row and just makes a waiting move because the black King is not placed opposite of the white King.
Don’t go with King to f4 to get the OPPOSITION because the black King will then move away to e6 to avoid OPPOSITION. 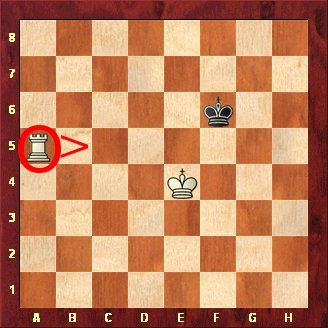 Hint: Never move your King into OPPOSITION yourself (to f4) or the opponents king will move away and you get nowhere. Use a WAITING MOVE INSTEAD!

Checkmate – See below
Try to reach a position like this below where the opponents King is at the last rank from where he can’t go backward anymore and the Kings are in OPPOSITION of each other. Then give checkmate with your Rook. 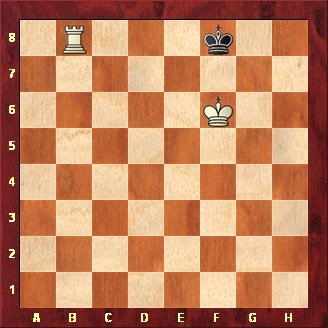