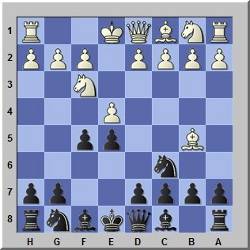 As you can see Black pushes the f-pawn to f5 and this weakens the squares around his king. So this clearly indicates that this can’t be a good opening system. Therefore I suggest you use it only as a surprize weapon against an unprepared opponent and hope for the best.

However I tested it and found that this is a very effective system against unprepared white players. But you should know it.

This system is used to upset Ruy Lopez (Spanish) players
and was explored 1847 by the Finnish player Carl Jaenisch, but adopted later by the German chess player Adolf Schliemann.

There is no clear refutation to the Jaenisch/Schliemann Gambit and it is used occasionally by grandmasters like Sokolov, Aronian, Zvjaginsev, Khalifman, Ivanchuk, and Carlsen.

White has two good moves to deal with it. First is 4.Nc3,
creating a lot of complications and the other is the positional move 4.d3.

However the point is that Black has to struggle more than White so why playing it in the first place. There are better opening lines around for Black than this.

This opening is playable, of course, but is this a reason why I should play it? After all you have to study it well as Black to survive or succeed. Why not study some sound main line opening that is better than the Jaehnisch Gambit. Imagine all the time that goes into this.

This Gambit is not played in important chess events like world chess championships and similiar events because of its dubious nature.

I collected below some top notch Jaenisch Schliemann Gambit games for you to replay to see in which direction the game is heading.