For some reason beginners in chess like to play the Kings Gambit. I don’t know why.

The Kings Gambit belongs to the open games. It begins with the chess moves:

White is offering the f-pawn for capture and hopes that he will get a long lasting initiative when Black captures the f-pawn. 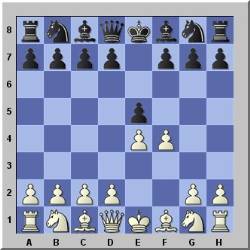 White sacrifices the f-pawn to divert the black e-pawn away from the center and plans to establish center control playing d4 afterwards when he has two pawns in the center on e4 and d4. This gives him more space to move his pieces around.

After that he puts pressure on f7 playing Bc4 and recapturing the weak f-pawn later on to put additional pressure on f7 along the f-file. (with rooks)

The Kings-Gambit was very popular in the 18th and 19th century. But later on this opening was researched further and good defense methods were found for Black. From then on this opening lost its popularity. As general chess knowledge evolved further improvements were made for both sides.

In some variations Black just returns the pawn and achieves a solid and defendable position. This opening is nowadays seldom played among grandmasters, but is used sometimes as a surprise weapon.

Nigel Short used it in the world championship 1993 against Garry Kasparov. It is played sometimes in open tournaments. If White has the edge as usual is doubtful but Black should not underestimate this opening.

2…exf4 It is quite allright to accept it and capture the pawn.
3. Nf3 d6! This is Bobby Fischer’s Defense Move, invented and researched by him. It controls e5. 4. Bc4 h6 This stops the knight to go to g5 and attack the weak point f7. 5. d4 g5 etc. with equal chances.

GM Roman Dzindzihashvilli favorizes the following moves for Black and maintains that the Kings Gambit is not a good opening for White. This is the opinion of quite a few grandmasters in the meantime.

I suggest you better invest your time learning a serious opening as White and just use the Kings Gambit very seldom as a surprize weapon or not at all. I never play it as it takes too much study to master all the main variations and there are better openings around, and I am a positional player and prefer a quiet game.

But if you are a young player and just started playing chess then you can use this active opening to get practical experience in tactical play and learn combinations. You need to learn a lot of tactics first before you play positional chess later on. So dive into the wild lines of the Kings Gambit.