This pawn structure occurs frequently in the Queens Gambit Exchange Variation…The Minority Attack is a chess strategy that considers the pawn structure of a particular position. Look at the following diagram. 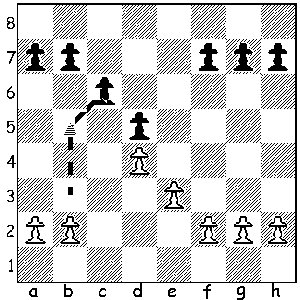 In the above pawn-structure White has two plans.

First plan: White will play the Minority-Attack and tries to win the resulting weak c-pawn. So he will play at the queenside. See diagramm above.

Second plan: White expands in the center playing f3 followed by e4. In this case he will play just in the center and the kingside.

How to play the Minority-Attack?
At the queenside White has just two pawns against three pawns. The goal is to create a black pawn weakness at the queenside. This weakness will then be attacked in the course of the game. To achieve this White moves his b-pawn to b5 and exchanges it for the c-pawn. Then a weak c-pawn will be the result. This is called a Minority-Attack. That means a minority of TWO pawns is attacking a majority of THREE pawns.

You can see the resulting position below. But here Black has not exchanged off his a-pawn which might also become weak in the endgame as White has usually more forces at the queenside when playing the Minority-Attack and will consequently be stronger there. 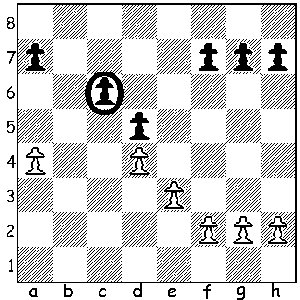 Hint: If you play the black pieces try to trade off your a-pawn playing a5. White will play b4 and then you exchange it off by axb. White recaptures with his a-pawn and continues to move to b5 as usual and exchange on c6 to create a weak c-pawn. This is the normal course of play but you got rid of your a-pawn. That’s the difference. (See diagram below) 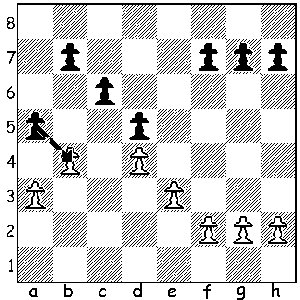 Why should I get rid of my a-pawn? The reason is, if you don’t get rid of your a-pawn, White will eventually win your weak c-pawn as this is the logical course of play. And if your a-pawn is still alive at this time you will lose this pawn as well because the a-pawn will become weak too, once the white pieces have penetrated into your position at the queenside. But if you have exchanged the a-pawn it will not be there anymore and so you can’t lose it. You save the loss of a pawn, that’s all.

These chess strategies are best demonstrated in many games played with the opening of the Queens Gambit Declined / Exchange Variation. Please study the pawn moves of White in those games.