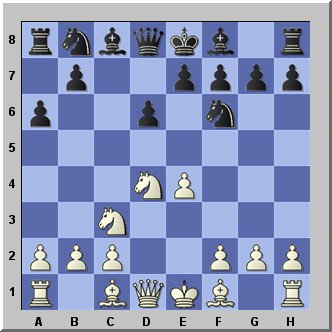 The Najdorf Variation can be a two-edged sword depending which variation you choose. Black attacks usually on the queenside and White on the kingside. There are positions in which Black castles long and White short.

The first Najdorf move is 5…a6 and appears to be not very strong, as it doesn’t develop a piece, but it is more flexible than 5…Sc6 and controls the square b5. This keeps away the white knights and the bishop. In addition Black can play moves like e5 and b5 later on or Black can play e6 and reach the Schevening Variation.

Black’s usually puts pressure on the white pawn on e4 with Bb7 and starts a minority pawn attack on the queenside with b5.

White can choose the sharp 6.Bg5 followed by f4.
A very popular response for Black is 7…Qb6!? which leads to the very complex Poisoned Pawn Variation 8.Qd2 Qxb2 9.Rb1 (9.Nb3) Qa3. As the white bishop on g5 is locked out in respect to the queenside the pawn b2 has become weak. White sacrifices this pawn for better development, but Black can catch up fast as his pieces can be developed quickly. This position is not easy for White to handle at all.

If White likes to play it quietly he can play 6.Be2 (instead of 6.Bg5) the game will be more positional then and Black can branch out with 6…e6 to the Scheveningen Variation or stay in the Najdorf playing 6…e5.

Black should study the English Attack 6.Be3 (instead of Be2) followed by f3, g4, Qd2 and 0-0-0.
This variation is popular and well analysed and the black answer 6…Ng4!? by Garry Kasparov seems to be a good anwer.
To avoid 6…Ng4!? White can play 6.f3 (instead of 6.Be3) which is a transpositon to the English Attack.

Highly respected is 6.Bc4 controlling the diagonal a2-g8 and the d5 square. If Black plays now 6… e5 then d5 becomes weak so Black usually plays 6… e6 to block the bishop on c4. The move 6.Bc4 is well respected and originates from Bobby Fischer who played it against all sorts of Sicilians. This move leads to a very tactical game.