What are the names of the chess squares? First get to know the names of all chess pieces. You got 1 King, 1 Queen, 2 Rooks, 2 Bishops, 2 Knights and 8 Pawns on 64 squares.

The basic start position in chess is like this: See the chess position below.

When you put the chess pieces on to the chess board, you should place them correctly on the right squares. There are some rules to follow.

Chess Board – Names of Squares 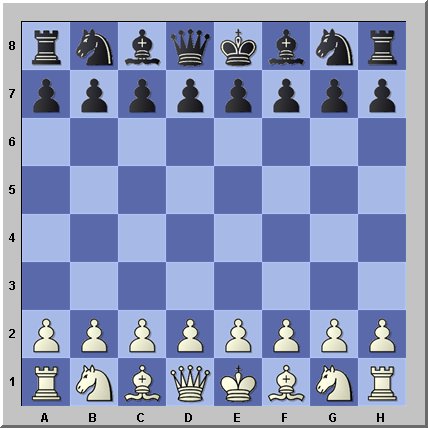 What are the names of the chess squares?
First look at the letter of the file on which the piece is located. For example, the e-file or the a-file etc. Then look at the row (rank) number, for example: 1,2,3,4 etc.

Let’s say you have located the square h1, now add the Piece description. For example: K for the king, Q for the queen, B for the bishop, N for the knight, R for the rook, and when it is a pawn you do not add anything, just use the square name.

For example: e4 This means a pawn is sitting on e4 or a pawn has moved to e4. Nf3 means that a knight has moved to f3 from somewhere…
BxN means a bishop has captured a knight. You can also describe this more clearly and write Bd4xNf6. This means a bishop on d4 has captured a knight on f6. If you castle SHORT you write 0-0. If you castle long you write 0-0-0.

Watch above how the chess pieces can move. You will see only the chess moves of this particular piece, but not the opponents moves. This makes it easier for you to memorize the behavior of the piece.

The King is the most important piece. The object of the game is to checkmate the opponent’s king. This is done by controlling all squares around the king with your pieces and check him at the same time. This makes it impossible for him to escape and the game is then finished. It is said the king is in checkmate.

If a king is threatened with capture (is in check), it is said that he is in check. The player must move the king away from the check or destroy the enemy piece that is checking the king or intercepting another piece to neutralize the check.

If this cannot be done the king is said to be in checkmate and the game is lost for the player. see Checkmate Positions

Don’t go for Checkmate right away

You don’t go for checkmate right away as the opponent has his whole army to defend the king. It is almost impossible to checkmate right from the start, if the player plays reasonable chess moves and does not open up the kingside.

Set up your Pieces first and castle

Try first to set up your pieces on good positions where they control the center and castle as fast as possible to bring your king to safety.

After that go and try to win material (pieces and pawns) until you finally penetrate to the enemy king, because of a superior position and overwhelming material. Chess is a materialistic game, so win material first if you can. But don’t grab too much or you might come into a losing position.

If you are up on material then trade off as many pieces as possible and go into the endgame. Simplify! In the endgame you will win the enemy pawns and create a passed pawn and move this pawn to the eight rank to transform it into a queen. After that you can easily checkmate the king with your queen.

This is a rough Guideline

This is just a very rough guideline for beginners. Chess is far more complex than that. But you have to start somewhere. When you know the names of all chess pieces learn how they move. After this play a game to get practise.

Learn about Stalemate in Chess
Go to Chess Strategies for Beginners


Return from Names of all Chess Pieces to Chess Strategies – Home