If you play the Ruy Lopez as White then Black can play the Marshall attack which is a very good answer. If you are not prepared you might run into an attack and lose easily.

One of the opening chess tricks is to avoid the dreaded Marshall Attack by playing 8.a4. But Black can equalize without too may hassles if he plays accurately. When you play the white pieces you should do this if you can safely assume, that your opponent is a specialist in the Marshall-Attack

You don’t want to run right into his home preparations, don’t you? But on the other hand it should be clear that you play like a whimp if you chose this emergency exit. Rather study the Marshall Attack yourself and fight back with the white pieces. Hey! You are not a coward, are you? 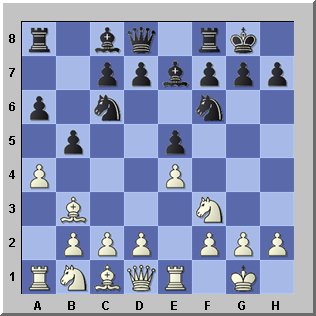 In the above diagramm White has played the Anti-Marshall (8.a4) and avoided the Marshall Attack. Other possible moves to avoid it are: 8.h3 or 8.d4.

The replayable chess games are organized. First you find games with 8.a4 then 8.h3 and after that 8.d4.