This chess opening strategy is not very popular because it appears to be not very inspiring and it often ends in a draw.

Petrov’s Defence is usually called -the Russian Defense- and starts like this. 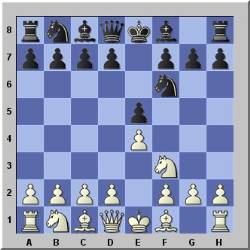 The move 2…Nf6 was first investigated and brought to the attention of the chess playing public by the Russian chess player Alexander Petrov (1794-1867), who lived in Saint Petersburg. He was the best chess player in Petersburg and has beaten the strongest players there. Just aged 15 he became the Russian champion.

This opening has a reputation as a remis variation and being boring. You can avoid the Petrov as White if you start your first moves like this:
1.e4 e5 2.Bc4! Nf6 3.d3

If you play the Petrov as Black you can avoid the Ruy Lopez (Spanish Opening), the Italian Opening and the Scotch Opening.

The classical move for white is 3.Nxe5. After that
Black has to chase the white knight back with d6!, before he attacks himself and takes the white pawn on e4.

So, don’t take the other pawn with 3…Nxe4? right away as this is bad as White will get the superior position after 4.Qe2. This variation is explained below.