Learn this new term and open your mind to another chess idea. If you have memorized many chess strategies you can use them in your games.

Quick Chess Strategies for you, to get aquainted with the terminology “Attacking Mark”. What is an Attacking Mark? Yes, this is a seldom used expression that you don’t find in many chess books.

An Attacking Mark is an object, that has to be attacked in order to achieve an advantage. The object can be a weak pawn formation or a piece that is misplaced at a position where it can be easily attacked. 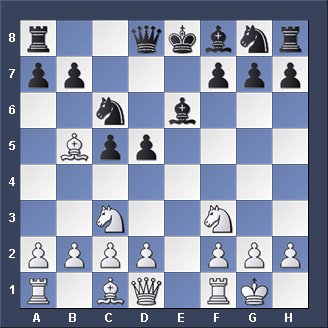 The black Bishop on e6 is the Attacking Mark.

If you have never heard this expression, “Attacking Mark”, then you will have a hard time to find “such a thing” in your game, because you don’t know, that in certain positions it exists in some form or another. So increase your level of awareness. Once this terminology “Attacking Mark” has penetrated into your consciousness, you will see it, if it happens in your game, I hope.

In the following game Black pushes too many pawns and neglects his development, whereas White concentrates entirely on piece development. He gets pieces out every move and castles as fast as he can.

Soon Black is running behind in development as White has castled already and has placed more pieces in the center than Black. After that White opens up the position to penetrate towards the black king that gets stuck in the middle.

Finally White simply starts an attack and overruns the black position. To achieve this White uses the misplaced bishop e6 as the Attacking Mark, a target on which he accumulates pressure. In the end White conquers the Attacking Mark (Bishop e6) and this leads to a deadly attack…

Game 1: The Bishop e6 is the Attacking Mark

In the first replayable chess game the Bishop e6 is the Attacking Mark.

Game 2: The Kingside is the Attacking Mark

In the following chess game Black (Expert) has got the chance (playing 1..Nf3+!) to weaken the white kingside and defines the whole white kingside as the Attacking Mark because of its vulnerability. Especially the pawn on h2 will become weak in the course of this operation. 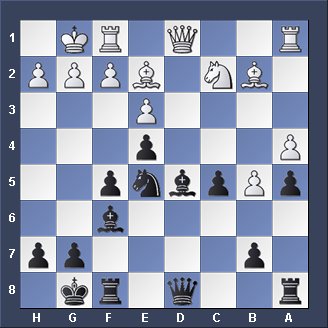 The Move 1…Nf3+! creates the Attacking Mark! It is the white Kingside. As a side effect Black gains the bishop pair and wins the rook for a bishop ( wins the exchange ) later on.