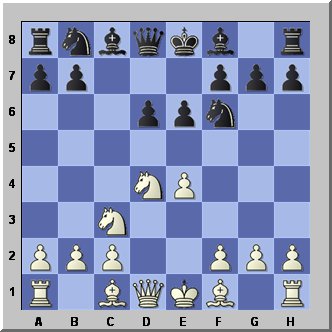 Keep in mind that Black does play sometimes first 2…e6 (not d6) and later on d6 which reaches the same chess position by transition.

Black has the center-pawn-formation e6 and d6, which controls vital center squares on d5 and e5 and has the half-open c-file. He initiates active play on the queenside and along the c-file against the backward c-pawn of white. At the right moment he can make a break in the center with moves like …e5 or…d5 changing the character of play in the center.

Get Books about the Sicilian Defence

Busting the Scheveningen with Bc4, Bg5, Qf3 – without f4!

Back to – Sicilian Defence
Go to – Chess Strategy – Home