by Sanskruti (Kalyan,maharashtra,india)
Is Stonewall a playable opening, if yes, then why?

I recommend the system of the Modern Stonewall Dutch where Black places his dark-squared bishop on d6. See below. 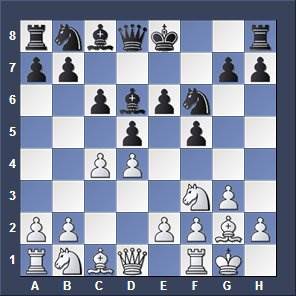 The Stonewall Dutch is playable. You should know the basic ideas and where to put your bishops.

Dead queenside Bishop
The problem is you have a dead queenside bishop at c8. You have to solve this problem quickly or you lose. Get this bishop out quickly and place it at h5 and trade it off if you can. (Bd7, Be8, Bh5) Play first Bd7 and Be8 BEFORE you get out your queenside knight to d7 or you block out your bishop by the knight at d7.
Or play b6 and put the bishop to b7 (Bb7) and play c5 later on or this bishop stays dead and is blocked by your c-pawn at c6.

You can replay games with the Modern Stonewall Dutch to get an idea how the game is played with Black.

I have played this variation myself many times as Black. I always tried to get out my queenside bishop to h5 early, playing Bd7, Be8 then Nd7, and then Bh5 to trade it off for a piece. But this procedure is not always possible. It depends how White plays.

What you should know
– Black has a static position as his pawns are blocked on white squares.
This reduces the power of Black’s queenside bishop as it cannot jump over his own pawns.
YOU HAVE A DEAD BISHOP!
This can be frustrating but you have to live with it or play another opening.

– Black must attack at the kingside or center if possible.

– White is pushing pawns at the queenside to open up lines and penetrates into the black queenside for example along the c-file.

– Black might get a weak pawn at c6 and lose it later on. If that happens he should have a strong attack running at the kingside to compensate for the loss of the c-pawn.

– Black should not get nervous and should NOT move pawns at the queenside when he places his queenside bishop to h5 at the kingside, because this pawn-pushing loses valuable time and weakens the position at the queenside and accelerates White’s attack.

– It is a good idea for Black to play the a-pawn to a6 and trade it off against White’s b-pawn, because after that the a-pawn does not exist anymore and you can’t lose it later on.

– White is stronger at the queenside and will eventually win one of your pawns there. So don’t try to stop the hurricane as you will not succeed but try to get counterplay at the other side of the board instead.
If you have traded off your a-pawn you can’t lose the a-pawn, its as simple as that.

– Black should generate counterplay quickly at the kingside (or center) and not be afraid of losing a pawn at the queenside.

– In this opening it is unlikely that Black is running into a kingside attack because of the blocked pawn structure in the center and because of the fact that White is attacking at the queenside.

– Black often gets overrun and loses at the queenside.

– If Black is unable to develop his dead bishop to the kingside to h5 then he can also try to develop his queenside bishop to b7 instead, playing b6 and Bb7 and can push his c-pawn later on playing c5. This is necessary to activate the bishop at b7.