Zugzwang is a situation, where a player has to make a move because it’s his turn. He would prefer not to make the move as this move will worsen his position, but he has to, as the chess rules require him to make the move. He is forced to move.

There are positions in chess, mostly in the endgame, where a move can seriously ruin your position and you lose. To be forced to move can change the outcome of the game from a win to a draw or from a draw to a loss. 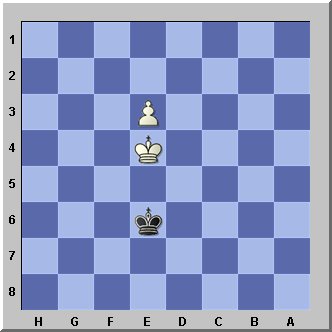 See above – If White must move then he is in “Zugzwang” because the game is drawn as Black keeps the opposition.

1.Kf4 Kf6 2.Ke4 Ke6 To proceed White must finally move ahead the pawn and will end in a stalemate.(see next diagram)

If Black must move, he is going to lose the game. 1…Kf6 2.Kd5 and White will eventually promote the pawn into a queen. etc. The outcome of the game for Black changed from a draw to a loss because of “Zugzwang”. 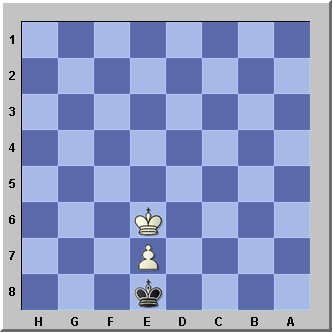 See above – If White must move, he will win the game as the black king must move away and White finally promotes the pawn into a queen. 1.Kf6 Kd7 2.Kf7 etc.

See above – If Black must move, he is in “Zugzwang” and it is stalemate, because the king can’t go anywhere. “Zugzwang” saves Black as the game is drawn. 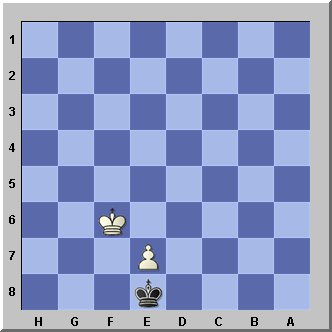 See above – If White must move, he is in “Zugzwang” and the game is stalemate after 1.Ke6 as the black king can’t move anywhere.

If Black must move, he is in “Zugzwang”. In this case he is going to lose. 1…Kd7 2.Kf7 and the pawn promotes into a queen.