I know what you think…

To play an opening like this seems dubious to a chess players mind. It can’t be right to move so many pawns in the opening and expose the king at the same time, to attack so early. There must be something wrong with this chess setup. Something like this can’t be correct. This line of play MUST be punished by Black. This is not the way how chess should be played.

One day God gave the SIX-PAWNS-ATTACK unto man and all chess players on the planet EARTH were screaming: Man! You can’t play chess like that. Everybody knows that!

Really?! Is that so? This would be the way how the logical thinking process of a chess players mind would evolve. Yes! This is so….I agree BUT still, there is a shadow of a doubt in my mind. And has it ever been proven that the Six Pawn Attack is not playable?? Is there a refutation known to men… somewhere? I don’t know any!

I challenge you. Play this opening in a serious game. Probably your game will be the first in the database since a long time. Your opponent might be extremely surprised and you might win just like that and run him over because he has no idea how to handle “this crap”.

You can’t mess around when you have Black. If Black keeps wondering what to do and plays too slow, White will overrun him at the kingside as Black will have no counterplay at all. Black’s knight on d4 will just sit in the center, very lonely and waiting for something to happen…and might wait forever.

After all this chess setup might not be bad at all but just has been forgotten and is out of fashion.

If Black does not play 6…c5 but 6…Na6 (which is followed by 7…e5 – which will blast open the center) then forget about the Six-Pawns-Attack and switch over to the Four-Pawns-Attack and play 7.Nf3 instead (and not 7.g4).

Important hint: If Black recaptures here with the bishop 8…Bxe you play 9.Nf3. (see diagram below) 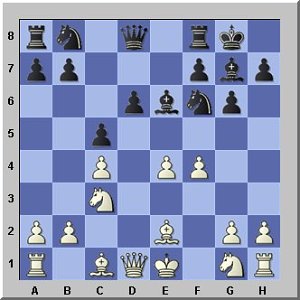 The Six-Pawns-Attack starts here with 9.g4! This chess setup requires that a pawn is placed at e6 and not the bishop! (see diagram below) 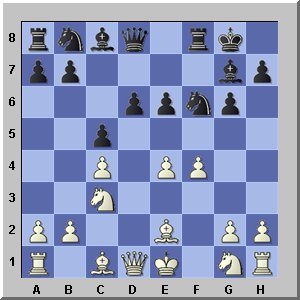 You can apply the Six-Pawns-Attack even better if Black plays the Benoni defense, because the center is closed already and Black can’t play the uncomfortable variation with 6..e5 which I will call the anti-six-pawn variation. (see replayable games) which blasts open the center..

You enter the same position but this is only possible if Black does not play e6 early, but plays d6 first and fianchettoes his bishop. See the following diagram. 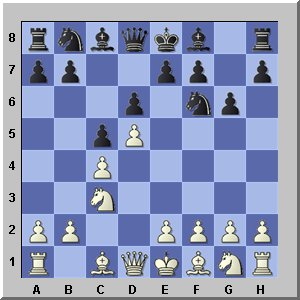