The game was balanced at all times and finally ended in a draw after all pieces were exchanged and the kings and pawns were left only.

Comments by GM Bogdan Lalic
“At the end it was an all blocked King and Pawn endgame. In this line Anand hoped for a complicated endgame, but Carlsen chose the boring line with Re1.

However, he did not put the bishop on d3 ( which sometimes leads to an attack on the kingside, see the game McShane-Nielsen from Hastings Premier some years ago ), but instead he retreated to f1. This is all known to be equal, at the end White was threatening a check on f6, but Anand found that Re8 move after that we had kind of a pawn endgame. In short quite a boring game.”

Both players are deep in trance. Please don’t disturb them! 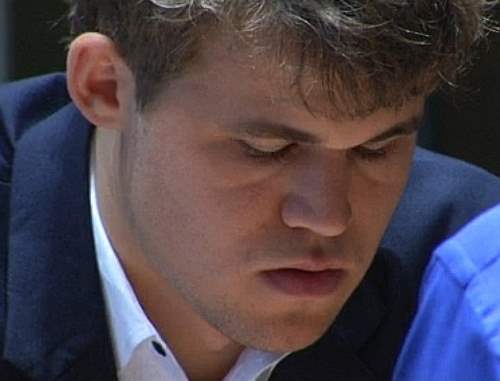 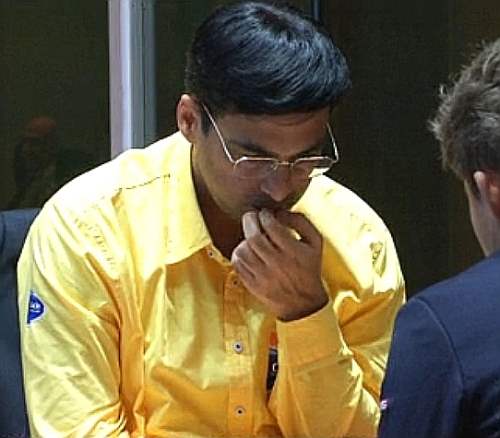 Carlsen played the Nimzo Indian as Black and deviated from the usual path playing 8…c4. He created a passed pawn later on at the queenside which promoted into a queen. At the same time Anand had a promising attack running at the black kingside, but Black’s second queen interfered and stopped it at the end. Anand had to resign due to material disadvantage. 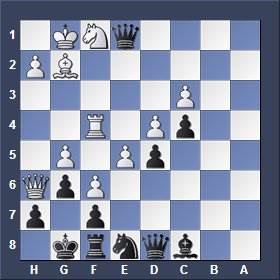 In the position above Anand (White) intended to play now Rh4 with a deadly attack, but Carlsen had moved his second queen to e1 on time to stop this. Now after Rh4 he would just trade his extra queen for the rook and would have a winning material advantage being a rook up. 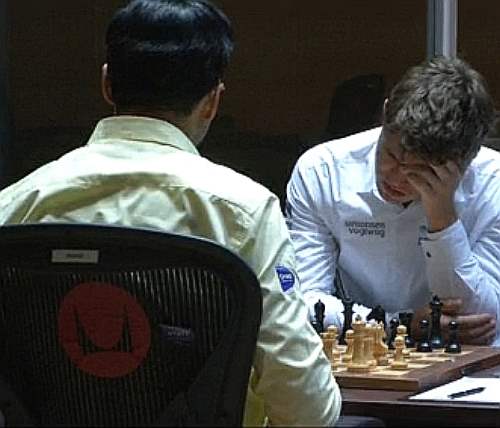 Now Anand must win the next three games to equalize which seems to be almost impossible to manage.

Comments by GM Bogdan Lalic
“It is incredible, Carlsen plays c5-c4 which Botvinnik long time ago called antipositional because it releases the tension in the centre ( on d4 ), the famous game Botvinnik-Capablanca 1938 AVRO.

In that game Capablanca even won a pawn on a4 after bringing the Knight on b3 but lost crushingly on the kingside.

These were all dogmas put upon the players which in fact do not exist – Carlsen plays peasant-like move …c5-c4 which looks antipositional but still wins because White’s Kingside attack is one move short!

How do we call it – computer chess, young age, play with energy? Whatever we call it but it is certainly the end of classical chess ( Alekhine, Capablanca, Botvinnik, Fischer, Karpov ).” 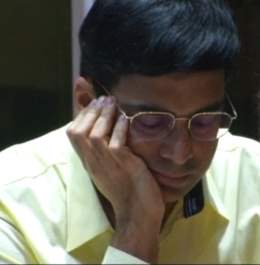 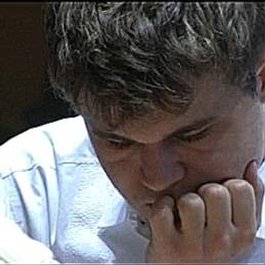 GM Deviatkin on Twitter : “It should be noted that Magnus defended as good as a computer, and the game leaves a feeling of an attempt to mate a computer.”

Anand (Black) plays the Sicilian Defense and nearly lost in the middle game but Carlsen made a mistake. In the even knight endgame the position finally became complicated but the game was drawn eventually.